The Versicoloured Emerald Hummingbird is one that there are many stories about in various cultures. It seems that many of the early drawings too are of this particular species. They were viewed as a source of energy and good luck. In some cultures they were though to be gods that provided them with rain and with fire so that humans would be able to survive.

This Hummingbird is from 3 to 4 inches in length when it is fully grown. They have a very long bill that is slender and slightly curved. It is a black color. They have a dark colored tail that can be green, gray, or black. They feature those same colors on their back. The shades and colors vary depending on the location where these Hummingbirds reside.

The feature very nice shades of green, blue, and turquoise on the top of their heads and the breast area. The belly is a light gray or a cream color. They have large eyes that are dark in color.

Central and Eastern South America are where you will find the Versicoloured Emerald Hummingbird. They have a very wide distribution and seem to thrive in a variety of different habitats. Some of the common areas where this Hummingbird is found include Bolivia, Paraguay, Brazil, and Argentina. The Amazon Basin the most well known area for them. This is due to the fact that they are able to find plenty of plants due to the water being so close.

They tend to live in habitat areas that are semi open. There are some trees but not thick forest areas. Many of the Versicoloured Emerald Hummingbird do fine in urban areas where humans are very close by. They seem to do very well living in such close proximity to them. 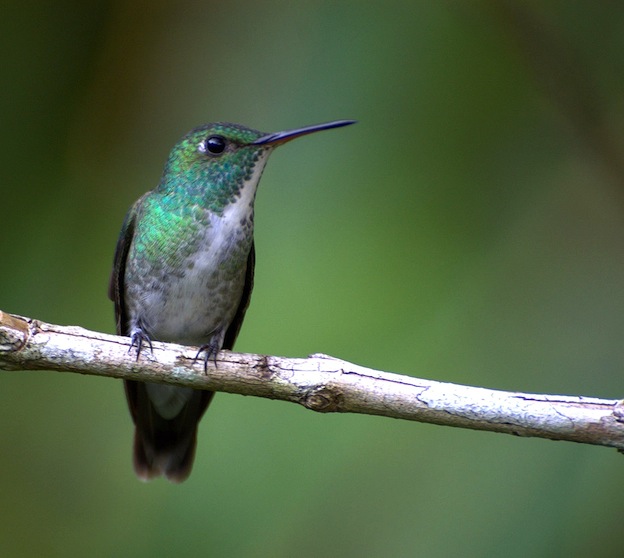 Even though the Versicoloured Emerald Hummingbird doesn’t socialize often, they do seem to be more tolerant of others around them than any other species of Hummingbird. They also are very curious which is why they are often drawn to areas where there are people and where feeders have been put out for them.

The mainly consume food from the plants around their living area that offer nectar. This plays a vital part in the pollination process too. Without their efforts there would be many types of plants that would be unable to survive. They use their long tongues to lap up the nectar. They don’t suck it up through their bill as many people believe.

The other portion of the diet for the Versicoloured Emerald Hummingbird is the insects that are around them. They typically consume them while they are still in flight. This provides the Hummingbirds with the protein they need.

The males are the ones that initiate mating but it is all up to the female to decide who she is going to be with. The males will parade their colors, dive at neck breaking speeds, and chirp all in an effort to get her attention. Other than during mating though the males really don’t do much interacting with the females.

They can become very aggressive too with other males. They will try to chase each other out of areas where a potential female will be at. Once mating has taken place the male and the female no longer want to be around each other. He will fly off to find other females for mating. She will start to look for materials to create a nest from.

The nest has to be complete in a few days so that she can place the two eggs in it. The time span for them to emerge is from 10 to 12 days. When the temperatures are higher they will arrive in less time. The young stay with their mother for up to 4 weeks and then they are already flying and caring for their own needs.