One of the most well known types of Hermit Hummingbirds is the Stripe-Throated Hermit Hummingbird. They seem to be well populated and at this time they aren’t considered to be in any danger of extinction. They are very well loved birds in these regions and people tend to enjoy observing them.

This is a very small Hummingbird that weighs no more than 3 grams. They measure about 10 centimeters in length. They have a wide body that is very fluffy and gives them the appearance of being larger than they are. These are very colorful Hummingbirds and as the name suggests they have a striped appearance on the throat area.

They often have gray and black coloring which is what the stripes consist of. Many of them have white on them as well. The area under the beak is a bright yellowish color. Some of them are green or red though depending on subspecies and location. Their colors have to be something that will blend into the surroundings to keep them safe. The young are often born completely gray but then they will start to develop the other colors as they mature.

The Stripe-Throated Hermit Hummingbird is found in Central America as well as the Northern portion of South America. They are mainly found throughout Mexico, Guatemala, Costa Rica, Ecuador, and Belize. They tend to live in areas that offer them a woodlands type of habitat. They do well among trees, bushes, and gardens. They have been found in both humid and dry areas.

The Stripe-Throated Hermit Hummingbird seem to be more vocal than most other species of Hummingbirds. The males have a pitch that is higher than the females. They are mainly solitary and can be very protective about territory. They will interact when it is time for mating and migrating. Sometimes their habitat overlaps and you will see several in a given area. However, that is mainly for feeding purposes and not for socializing. 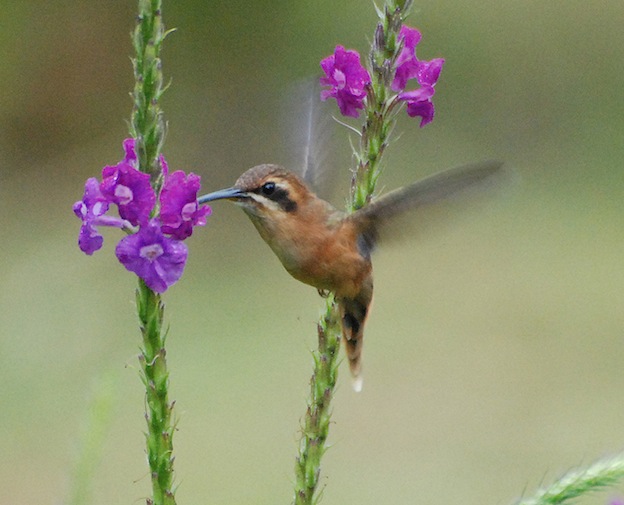 Nectar from flowers is the most common source of food for the Stripe-Throated Hermit Hummingbird. They are able to pierce flowers that would otherwise not be available for them to get the nectar out of. They are very intelligent and have a process for feeding that helps them with overall survival.

These Hummingbirds also have a regular diet of plenty of small types of insects found in their habitat. Not only does this offer them more nutrients but it also helps them to have the amount of protein that they need in their bodies.

The male Stripe-Throated Hermit Hummingbird attracts the females through his chirps, vivid coloration, and doing diving at fast speeds that will be impressive to her. Should the female decide to mate with a male it will be a process that takes only a minute or so and then they go their separate ways. The males will continue to look for other females to mate with.

The females will begin the task of finding a place to make a safe nest for her eggs. She will usually deposit two of them into the nest and carefully watch over them. She will only leave to get food for herself close by. Breeding usually takes place in the month of March but can vary based on climate in certain locations.

The young hatch from the eggs about 2 weeks after being placed in the nest. They are extremely small and the mouth will have to bring food back for them to survive. Within 3 weeks they are grown, have feathers, and are able to fly. They will leave the nest at that time and have to fend for themselves.