One of the types of Hummingbird species that people know a great deal about is the Rufous Hummingbird. They are one that people immediately know the species of and that they enjoy. The other reason that they are so well known is that they live in many areas. Therefore, it isn’t uncommon for people that have seen them locally instead of just photos on them online or in books.

The females are about 3.4 grams in size and the males are a bit smaller – around 3.2 grams. They are very pretty and they are often commented about due to the display of amazing colors that they offer. They are a bronze color in many areas including the belly. That part is also white and the two colors contrast very nicely with each other.

The tail offers a ruffled type of look and it is a dark color with the same bronze as on the back. They have winds that are also black along the tips and then bronze as you get closer to the body. Sometimes that area of their body will show and other times they will be hiding it. They also have some white that is offered around their throat. The slender design of the black bill is also a trademark part of their look.

Since Hummingbirds are so small there have been no fossil remains found. Still, most experts do believe that the have been around for millions of years. They believe that they were once larger birds but got smaller in order to survive on less food. It is also believed that their ability to slow the heart rate, to slow metabolism, and to be in a hibernation like state when it is cold are all adaptations that have occurred throughout time to help them evolve. 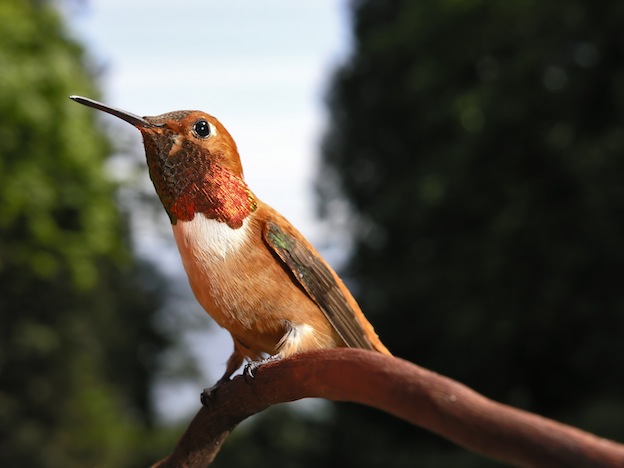 This is believed to be the most aggressive of all species of Hummingbirds. They are well known for chasing each other out of territory. These birds are serious about protecting where they are going to live and where they are going to eat. Even when they aren’t eating themselves they will carefully be monitoring their feeding areas. If they notice and Hummingbirds that seem to be taking an interest in doing the same thing they will quickly let it be known that it isn’t acceptable.

What is also interesting though is that they don’t just take an interest in what is going on with Hummingbirds. They will also take on wasps, bees, and other creatures that are known to consume nectar. They don’t want to run the risk that by sharing those supplies they won’t have enough for themselves later on.

The extremely diversified location of the Rufous Hummingbird is extremely interesting. First, they have one of the longest migration routes of any birds. Some of them go for more than 2,000 miles – and that is only one way. They have to be very strong and well fed in order to be able to make it this type of distance annually.

The winter months for this species of Hummingbird takes them to Mexico and Panama. Getting across the Gulf of Mexico is a 500 mile journey that they are able to do without stopping. That type of stamina is certainly something remarkable, especially when you take their small size into consideration.

These Hummingbirds are able to live in areas that others don’t. They seem to be able to adapt very well to just about any location too. They live in areas out there all over the world. In fact there are only three places that have been identified as a location where you won’t come into contact with them. Those areas are Quebec, Prince Edward Island, and Hawaii.

They tend to stick to areas such as the coniferous forests and where there are shrubs. They are fine living in regions close to humans and where humans have altered the natural habitat. As long as they can find a place to sleep, safety from predators, and plenty to eat they will do very well. In fact, in some public places including parks it is the very presence of the Rufous Hummingbird that draws people to the area.

Sugar and protein are the diet elements of this Hummingbird, just like all other species. They get the sugar that they need from the nectar in plants. They have a system and a great memory so they know which flowers are ready for them to feed from as well as those that they need to skip over.

The other source of food that they get is from insects, and that is where the protein comes from. They feed many times a day but only for a period of time that is less than 1 minute. They tend to need to consume up to 3 times their own body weight per day. 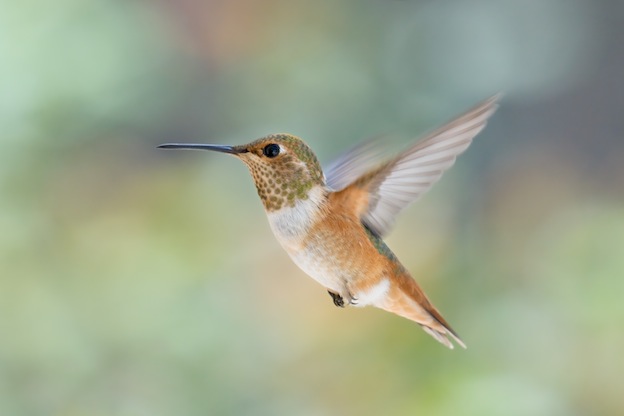 While the mating process is very spectacular for most species of Hummingbirds, that isn’t the case for this one. The males will engage in some courting rituals including chirping and diving but it is less of a show than with other species. Mating and migrating are really the only times when they will interact with each other.

The males will go around and find as many females to mate with as they possibly can. The females will start looking for a place to put a nest after mating. They instinctively know that if they don’t find a place that is safe, that is close to food, and that offers protection their young won’t survive.

She will likely have two eggs that will be placed into the nest she has created. She will wait for them to arrive – up to 14 days later. When the temperatures are warm they can arrive in about 10 days. The young depend on their mother for warmth, food, and comfort. They learn how to fly within about a week but they won’t be strong enough yet to fly away and care for themselves. That will take a few more weeks and then they will fly away from their mom and try to survive on their own.

There are several types of predators for Hummingbirds due to the very small size of them. The Rufous Hummingbird tends to live in areas where there are lots of people. As a result they also tend to be very vulnerable to domestic cats. They do find these birds to be something that they will kill but often not eat.

Homeowners that put out feeders for these Hummingbirds should make sure they are up high enough that cats in the area won’t be able to get the element of surprise on their side and take out these delightful birds while they are dining. Keep a good eye out for this and make sure the cats have plenty of food too so that they won’t be tempted to mess with the birds.

Other predators in the wild can include snakes that may live in the trees where they sleep and where they put their nests. Sometimes there are problems with venomous spiders that can inject the poison quickly and the Hummingbird isn’t able to move at all. Since they are small, stings from wasps or bees can also cause death for them.