There are 343 identified species of Hummingbirds found around the world. This makes them the second largest bird family in the world. They are different from other birds due to their aerodynamic layout. They are the only type of bird that can fly backwards and upside down. This is because the design of their wings is circulate in motion rather than just up and down.

The range in size for the various types of Hummingbirds isn’t much at all. The smallest are 2.2 grams and the biggest are 20 grams so you can see that they aren’t large at all. Still they have a very well designed body. They also have a backbone which is very unusual for birds. Under the wings and the neck they have lovely coloring that is often hidden to help them blend into their surroundings.

They only have from 1,000 to 1,500 features on their bodies. This makes the Hummingbird the species of bird that has the least. This is also why they often slow down their metabolism as the sun goes down. Not only does this feature serve to help them conserve energy, it also allows them survive when the sun goes down and the temperatures begin to drop.

Another interesting development on the bodies of the Hummingbirds is that they aren’t able to walk. They use their feet for perching only. That is why they are often seen just hovering when they want to remain in a given place instead of using their feet.

Studies show that as a species the Hummingbird has the largest brain size of all birds in comparison to their overall body size. Additional studies have proven them to be very intelligent and to have excellent memories.

They survive mainly on nectar that they find in flowers and plants. They don’t suck it up though as many people think. Instead, the tongue of Hummingbird species looks like the letter W. They use it to lick up the nectar at a very fast pace. They eat several times a day but only for a minute or less at a time.

They have to eat about 3 times their body weight per day. They mainly consume sugar but they also will get protein from small insects that they dine on. The live span for most of these species is very short. They don’t have much protection from predators so more than half of them won’t last an entire year. The life span is an average of 8 years but does vary based on the specific species. 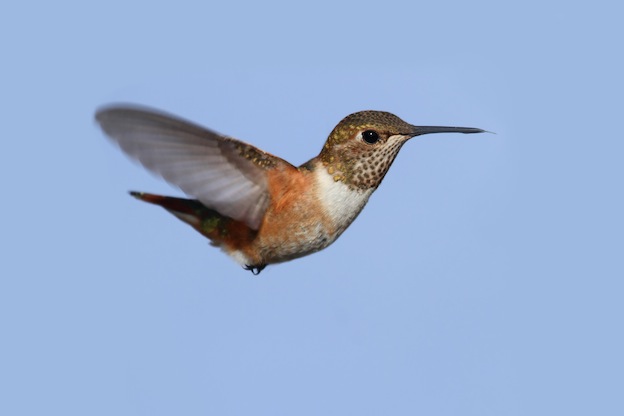 They are highly adaptable but when there is a lack of food for very sudden temperature changes for them it can bring along high levels of stress. Then they won’t eat and that can be a problem even when food is around. All Hummingbird species migrate in the winter for warmth and that is also when breeding occurs. The travels can be up to 2,000 miles each way for the trip.

One of the most widely recognized parts of that migration process is the large number of Hummingbird species that will fly over the Gulf of Mexico. This is a 500 mile stretch that they do at one time without resting. That means that they have speed, endurance, and a body that is designed for their ultimate survival.

Hummingbird species have long been evaluated by experts around the world. They continue to fascinate us with their movements, their survival, their gorgeous colors, and the way in which they are able to continue to modify their habits in order to survive in a given habitat.