Mating is a very interesting time to observe the behaviors of the Hummingbird. Most species are mature when they are just a few months old. They typically have breeding grounds that they return to year after year. The season for breeding varies based on the climate in that given region.

The courtship dive is a tell tell sign that there is something about to be going on. The males may move the wings hundreds of times per second to get the attention of the female. He will also change his flight speed from about 30 miles per hour to about 60 miles per hour.

The courtship dive is very elaborately placed and gracefully executed. This is something that you will see during the peak of the nesting season for the Hummingbirds. The male will go at least 60 feet in the air and then dive down nose first at a breaking speed, then arc, and repeat it over and over again.

This movement is going to attract females in the area that are ready to mate. It is believed that the fast movement gives off more humming sounds and that is what attracts the females. The males will compete for space to do these courtship dives in. The idea is for a male to dominate an area so that he won’t lose out on a potential mate to other males.

Loud chirps are also a type of process for mating attraction. While the Hummingbird can chirp at any time they tend to be reserved about it. During the hunt for a mate though it is used to find out the location and the interest of others. It is also used by the males as a warning to keep other males out of a given location.

Hummingbirds have an array of colorful feathers but they tend to hide them most of the time. The colors can make it tough for them to blend in which is why they don’t often display them. The exception though is when the males are trying to attract the females. It is believed that a colorful display is something that those females old enough to mate are often attracted to. 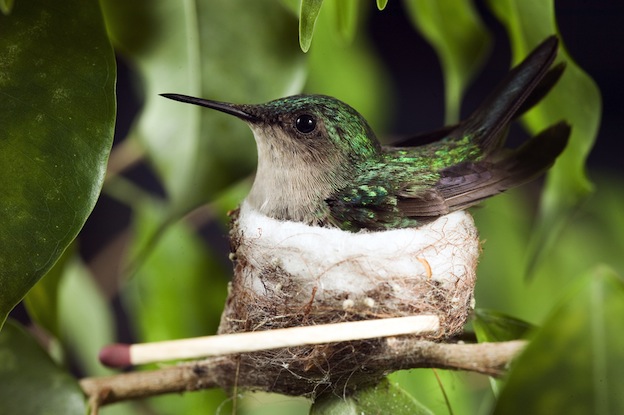 In spite of all of his efforts though there are still times when a mature female simply won’t be interested and he will have to go away defeated. It isn’t understood why sometimes this occurs. However, studies show that for the most part a female will mate with a male who has displayed all of these different courtship rituals.

After mating the couple will go their separate ways. It is common for the males to go and search for other females to mate with before the season is over. The female will spend her time creating a nest and eating. She will deposit small eggs into the nest that she will keep warm. Most of the time she will have two eggs but sometimes there are three or four. When her young are born they will be about the size of a penny.

The young will be helpless at birth and rely on their mother for food and warmth. They will grow quickly though and by the time they are about 3 weeks old they can fly and will leave the next to fend for themselves. More than half of all Hummingbirds die within the first year of life. The average life span is about 4 years but it varies by location and species.