You will only find Hummingbirds living in South and North America. There are several species found in areas of Alaska. This is as far North as they have been identified. Their habitat in the South extends down to the Southern tip of Chile.

They definitely have a very diverse habitat in terms of location. Ecuador is home to more different kinds of Hummingbirds that any other area. There have been 163 different species identified there so far that are able to find habitat and thrive.

Due to their small size many people see them as fragile birds that won’t be able to survive in cooler areas. However, they have been found in the desert areas, coastal regions, forests areas, and meadows. They do require areas that have a warmer temperature though for breeding to take place. That is why they will take part in this part of their life cycle during migration.

These birds are found living among the trees, bushes, and vines in their given habitat. They are very territorial and keep a close eye on who else is in their range. They will fight with each other over food sources and habitat.

They try to find a place for sleeping where they have some shelter. Since these birds are small and have no real defense they do their best to remain well hidden from predators and other dangers. Sometimes they are found sleeping upside down in fir trees. It is believed this is just one more way that they are able to blend in with their habitat to remain unseen.

Experts believe that the Hummingbird has an amazing memory. They are believed to have a pattern of where they will go for food and around their niche elements. Some experts go as far as to say that the Hummingbird can remember all the flowers and plants that they have fed from and how long it will be before they are able to feed from it again.

These birds are quite territorial too. They will fight with each other to protect where they have been living and where they are finding food. They seem to do fairly well in captivity but they also seem to thrive out in the open where they can move freely. Many places of captivity such as zoos offer a lovely forest looking area for them to find food and to hide in trees. 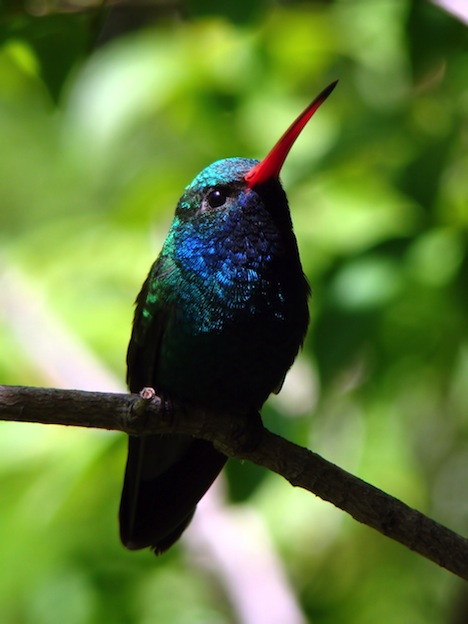 Broad-billed hummingbird in their natural habitat

They tend to live alone and will put up with other Hummingbirds in the area as long as there is plenty of food around. When they migrate they will do so in groups which allows them to be able to benefit from the aerodynamics of their movements in the air and to conserve energy during movement.

The habitat for the Hummingbird continues to get smaller and smaller all the time. There are several reasons for this occurring. One is that the chemicals out there in the environment have caused them some various serious health concerns. As areas of trees and plants are cleared out they have less space to live and often struggle to find enough food. Too much stress can also cause them to not eat and that can prevent them from thriving as well.

Changes in climate due to global warming can also have a negative impact on the Hummingbird. They find it is difficult to regulate their body temperature at times when it gets hotter or colder than normal. Today there are various conservation efforts in place for some species of the Hummingbirds. Over all though they are doing well and not considered to be in danger of extinction.