There are some wonderful facts out there about the Hummingbird to learn. These are definitely some of the most fascinating birds in the world.

The name of the Hummingbird comes from the fact that these birds make a humming sound with their wings when they are in movement.

This happens to be the smallest of all species of birds in the world. The young offspring are no bigger than a penny.

The Hummingbird is also the smallest animal in the world that has a backbone.

There is no ability to smell for the Hummingbird. They seem to be attracted to the colors of plants and flowers. Red is the dominant color that they are attracted to.

This is the only species of bird that has the ability to fly in all directions. They are able to fly backwards, forwards, upside down, and even side ways.

They are able to conserve energy by slowing down their metabolism to about 1/15th of the normal speed. During a normal period of time their heart will be more than 1,200 times per minute.

Like other birds, this one migrates in the colder times of the year. They may go up to 2,000 miles. The stretch over the Gulf of Mexico is 500 miles non stop.

There are 343 species of Hummingbirds that have been found in the world.

The Hummingbirds are the second largest family of birds.

This bird has the largest brain in comparison to its body of all species of birds.

All species of Hummingbirds live in either North America or South America.

There are some species of Hummingbirds that live in Alaska. That is the coldest place for them. The warmest climate where they are found is in Chile.

More types of Hummingbirds are found in Ecuador than any other location. 163 species have been identified in this region.

More than 50 different species of Hummingbirds are known to mate annually in areas of Mexico.

There are 16 species of Hummingbirds that mate in the United States. 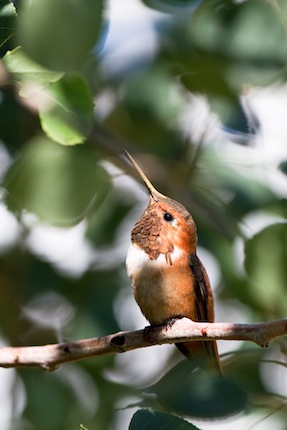 More than half of all Hummingbirds will die during the first year of life. The life expectancy for those that survive it is up to 4 years. However, there is verification of one that lived for 12 years.

Feeding habits are very interesting for this species of bird. They can feed up to 8 times an hour. Each time that they feed the duration is from 30 seconds to 1 minute at a time.

These birds have the highest natural metabolism of all animals in the world.

The main sources of food for the Hummingbird is sugar, sap, pollen, and insects. They will consume up to 3 times their body weight in food daily.

Hummingbirds are extremely territorial and they will fight with each other over food and location.

These birds play a very active role in the pollination process of the plants that they consume nectar from.

Vocalizations are common with Hummingbirds. They can’t sing but they do chirp.

Sometimes Hummingbirds are found sleeping upside down in trees.

They seem to do well in captivity as long as they have lots of space.