Anna’s Hummingbird is named after Anna Messena who lived from 1802 until 1887. In Europe she was a very prestigious woman. She grew up as the daughter of a military general. She married the second Duke of Rivoli, giving her the title of Duchess of Rivoli.

This particular species of Hummingbird is medium in size. They are about 11 centimeters long when they are fully grown. They may be smaller than that though depending on the specific region where they live. They have great colors that they rely on to help keep them safe from various predators and dangers around them. They have a bronze color that is very shiny on their back along with several shades of green.

On the belly they feature a gray color that is typically very light. They also have dark shades of red, orange, brown, pink, and green on their heads. The crown is a bright red color. They have a roundish tail that is white or cream in color.

The design of the body for this species of Hummingbird is one that is very well for them to survive. They are small enough to live in very secure locations high up in the trees. They are also powerful though in the fact that their wings allow for aerodynamic movements. These Hummingbirds appear to be very graceful and exact when it comes to their movements. 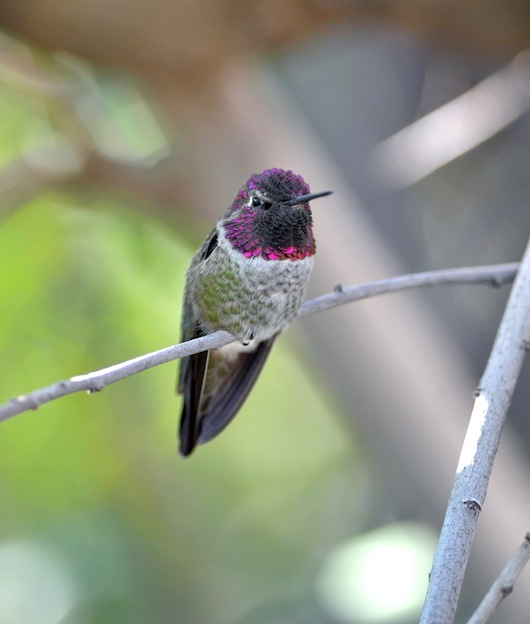 There is no evidence about how long the Anna’s Hummingbird has been around or where the evolution process for them branched from other species. The fact that these creatures are so small makes it nearly impossible for any fossil remains of them to be found. Yet the fact that they seem to thrive in so many locations indicates that they extremely versatile.

All Hummingbirds are able to go into a state where they slow the body down to just a fraction of what it would normally do. This process is believed to be part of evolution too so that these birds can make it when it is cold or when there is a limited amount of food available to them.

When it comes to territory, the Anna’s Hummingbird doesn’t mess around. They do all they can to protect themselves from the invasion of others. They don’t like to share their territory for fear of losing a place to sleep, a place to hide, and even their resources for food that they have come to rely on in that area. They may overlap sometimes but only when there is plenty of food to go around.

What is very interesting is that the Anna’s Hummingbird is able to live in cooler areas. They do so by slowing the rate of their heart and metabolism to up to 1/15 of what it is during the day. They are able to conserve energy this way and to maintain their body heat. This type of process isn’t actual hibernation but it is very similar. They may go through this cycle on most nights to stay alive and well.

You will find the Anna’s Hummingbird living around the West coast of the North America region. They enjoy the coastal areas due to the water being a prime location where plenty of nectar producing plants grow. They can be found down in Baja California all the way up to areas of Canada.

In recent years though these Hummingbirds have also been tracked to places they weren’t known to live before. Those areas include New York. Florida, and Louisiana. It seems that they are able to really thrive anywhere that offers them a safe habitat and enough food for them to survive on.

It may be hard to see the Anna’s Hummingbird though as they hide out along areas of shrubs and trees. You may need to look very hard with a pair of binoculars to stop them. They seem to be doing very well even in those areas where human efforts have changed their habitat.

The majority of the diet for any Hummingbird comes from nectar and that is no different with the Anna’s Hummingbird. They have a tongue that features a grove in it that allows them to easily get the nectar from plants. They are able to remove it quickly and very little energy is used in that process.

Experts agree that the Anna’s Hummingbird is the one living thing responsible for pollinating various plants in given locations. They don’t believe any other living creature would be able to do so. Therefore, without those Hummingbirds such plants wouldn’t have a chance of survival.

The other part of their diet consists of a variety of small insects around the area. There are times of the year when those insects are more plentiful than others. The specific insects that they will feed on depends on their location. 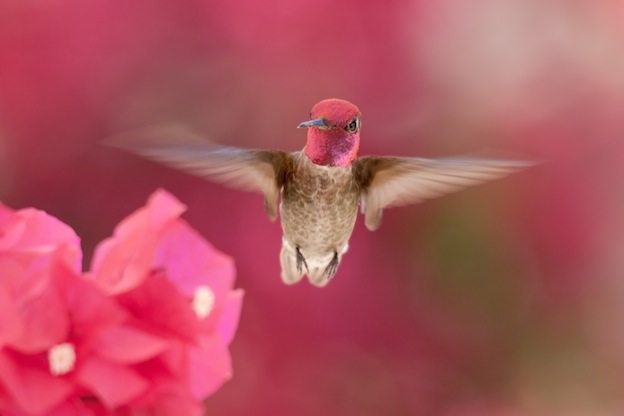 These Hummingbirds migrate to British Columbia and Arizona in the winter months. That is also where they will join up and find mates. They will do so along the mountain regions or in shrubbery so it can be hard to really observe the process. The males are the ones that will initiate the mating. They are very detailed in efforts to create a favorable courtship.

The males often dive, the make loud chirping sounds, and they will display all of the colors on their grand bodies to the females. During mating the males also have the ability to sing a song. They don’t sing any other time of the year and females aren’t able to sing.

The couple will quickly go their separate ways after mating has been successful. The males will go about trying to find more females that they can mate with before the season ends. The females will get busy finding materials to create a nest for the eggs. She wants a secure location that is safe and where she can leave to get food and then come back.

She will deposit two very small eggs into the nest. It will only be a couple of weeks before the young arrive. They will be helpless and need her to bring them food and to keep them warm. They grow quickly though in within a few weeks they can fly and they can begin to find their own food.

The fact that the Anna’s Hummingbird live very close to humans in many regions allows one of the top predators for them to continue to take a toll. The domesticated cat is very common in society and so it the desire that it has to kill birds. Experts aren’t sure why though because they don’t usually eat them. It could be due to the instincts that cats in the wild have though to hunt and feed on birds.

In the wild some Anna’s Hummingbirds do become victims of such cats it is very easy for those skilled predators to get into trees too. They often hunt at night which is when the Hummingbirds are sleeping. Snakes and venomous spiders can also attack these Hummingbirds while they are in the trees. Sometimes there will also be concerns with wasps, preying mantis, and bees due to the small size of these birds.